The 2013 Master Sample (MS) design for household-based surveys is a two-stage cluster sampling design with barangays/Enumeration Areas (EAs) or group of adjacent small barangays/EAs as the primary sampling units (PSUs), and housing units/households within the sample PSU as the secondary sampling units (SSUs). The 2013 MS sampling frame is constructed based on the results of the 2015 Population Census. The EA Reference File (EARF) of the 2015 Census of Population is used as the PSU frame while the 2015 list of households for each of the PSUs are used as the SSU frame.

To provide subnational or provincial level statistics with precise estimates the 2013 MS has 117 major sampling domains as follows: 81 provinces (including the newly created province Davao Occidental); 33 highly urbanized cities (including 16 cities in the National Capital Region); and 3 other urban areas (Pateros, Isabela City, and Cotabato City).

In the 2013 Master Sample Design each sampling domain (i.e, province/HUC) is divided into exhaustive and non-overlapping area segments known as Primary Sampling Units (PSUs) with about 100 to 400 households. Thus, a PSU can be a barangay/Enumeration Area (EA) or a portion of a large barangay or two or more adjacent small barangays/EAs.

In the Philippines, a total of 87,098 PSUs are formed out of 42,036 barangays. Of this number, a total of 910 barangays are reported as least accessible while 734 are identified to have peace and order problem. Least accessible barangays (LABs) are excluded in the selection process and thus have no chance of being selected.

For each province/HUC domain, All PSUs are ordered and sorted according to the following: (1) North-South/West-East Geographic location; (2) Decreasing Proportion of HHs with Overseas Worker; and (3) Decreasing wealth Index. 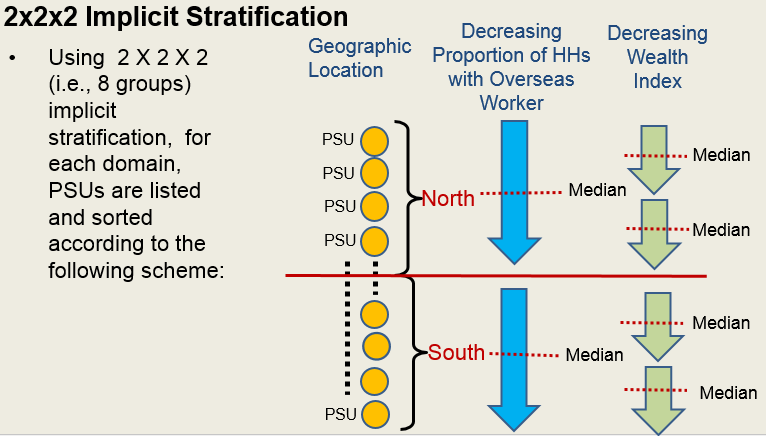 Three (3) PSUs are drawn to form a replicate for small province/HUC domains such as Batanes, Guimaras, Siquijor, Camiquin, Apayao, Dinagat Island, San Juan City, Pateros, and City of Isabela while Five (5) PSUs per replicate are allocated for Lucena City and Cotabato City.

The table below shows the allotted number of PSUs per replicate and the resulting number of replicates formed per sampling domain.

Number of Replicates formed per Domain

Replicates are sorted at random so that the first four will be used in the first quarterly Labor Force Survey (LFS) round, the next four in the second LFS round and so on. These replicates are then renumbered consecutively for convenience. 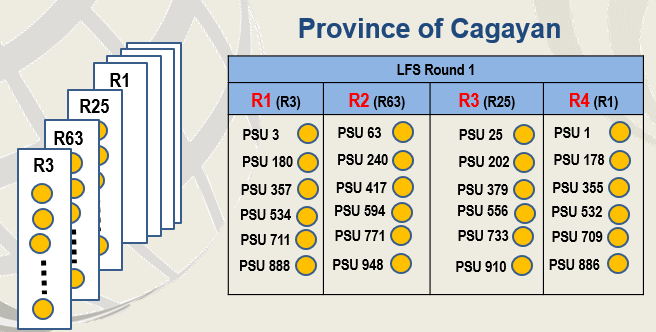 Sample Allocation of PSUs and SSUs per Domain

At the first stage, PSUs are systematically selected from the Master Sample PSU frame of each sampling domain with equal probability. During the second stage of selection, housing units are drawn systematically for each sample PSUs.

The base weight is computed as the inverse of selection probability 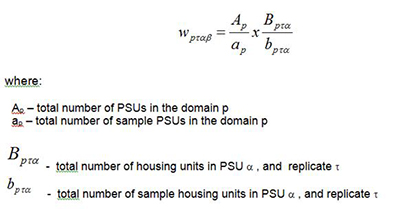 The base weight is adjusted for unit non-response and further calibrated to conform to the known or projected 2016 population count.

Applying this to the base weight, we have:

Further adjustment (calibration) is made to conform with known population count, as follows: 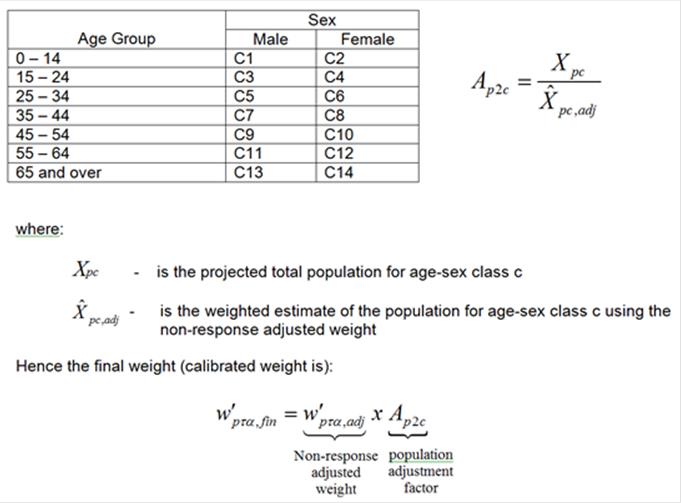 Replacement sample will be made available together with the list of samples. We allocate at most 3 sample household replacement per sample PSU. We replace only those at the time of the survey are found to be ineligible.

A household is considered not eligible for the survey under any of the following cases: